Lake Covering Problem and a Solution to the Particles Riddle

A circular lake of radius

meters must be covered by rectangular boards of length

meters.
Rectangular boards of all widths are available, but the cost of a covering is the total width of the boards used. Clearly the lake can be covered by using parallel boards of total width

meters.
Is there a more efficient covering possible? Here are examples of two competing coverings. 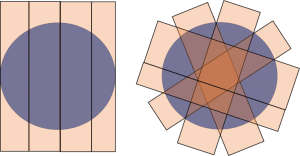 In a previous post I discussed the Particles riddle, a solution of which is as follows. Cover the unit square by four closed subsquares of side length 1/2, denoted

as in the figure. Suppose that the initially awake particle is located at

, and there are sleeping particles in

(the case when some of these are unoccupied is easy to handle.) The particle at

wakes up a particle at some point

time units, one of these two particles can travel to wake a particle in some

, and at the same time, the other  can travel to wake a particle at some

time unit, one of the particles from

and one of the particles at

, there will be an awake particle in each of the originally occupied subsquares

. The argument can now be iterated in each of these subsquares. Repeated subdivision will yield a geometric series

as an upper bound for the time needed to reach all

particles. The constant 6.2  can certainly be improved; we will not try to optimize this constant. See also a similar solution posted by Sang-il Oum here. 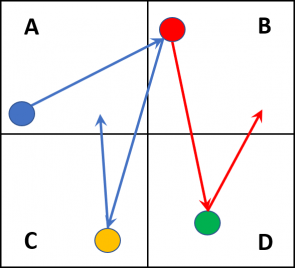 The argument above readily generalizes to higher dimensional cubes (where the constant will depend on dimension) and to other self-similar sets. Compactness and convexity are not enough, however: Let

be an orthonormal sequence in Hilbert space. Then the closed convex hull of

is compact, but the time needed to reach the first

is an instrinsic metric on

). In particular, a convex set in  a  Banach space is a length space; for the particle problem, it is natural to restrict attention to length spaces. The assumption that the particles travel at most at unit speed means that their paths are Lipschitz maps from

if there is some doubling constant

such that every ball

, can be covered by at most

The following statement is easily proved by induction on

particles, one of them awake, in a doubling length space with doubling constant

, all particles can be woken up by time

. (As before, awake particles travel at unit speed).