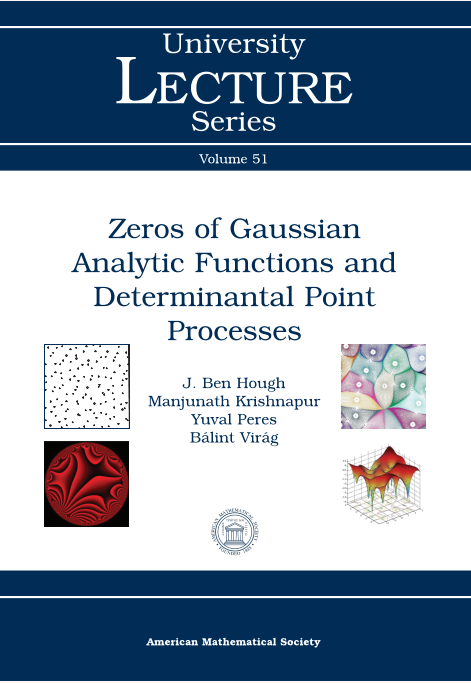 Random configurations of points in space, also known as point processes, have been studied in mathematics, statistics and physics for many decades. In mathematics and statistics, the emphasis has been on the Poisson process, which can be thought of as a limit of picking points independently and uniformly in a large region. Taking a different perspective, a finite collection of points in the plane can always be considered as the roots of a polynomial; in this coordinate system, taking the coefficients of the polynomial to be independent is natural. Limits of these random polynomials and their zeros are a core subject of this book; the other class consists of processes with joint intensities of determinantal form. The book is designed for graduate students in probability, analysis, and mathematical physics, and exercises are included. No familiarity with physics is assumed, but the reader should be comfortable with complex analysis   with graduate probability.

Chapter 1 starts off with a quick look at how zeros of a random polynomial differ from independently picked points  Chapters 2-4 provide an introduction to the theory of Gaussian analytic functions (GAFs) and gives  formulas for the intensity of zeros.   Three important classes of geometric GAFs are introduced: planar, hyperbolic and spherical GAFs, whose zero sets are invariant in distribution under isometries preserving the underlying geometric space. Chapter 4 introduces determinantal processes which are used to model fermions in quantum mechanics and also arise naturally in many other settings. Later chapters analyze these processes in more depth.