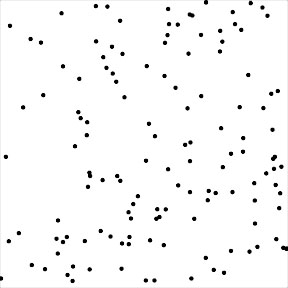 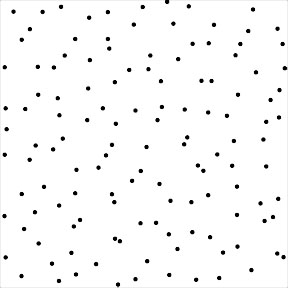 A Poisson point process (left) and zeros of a planar Gaussian analytic function.

where an are independent standard complex Gaussian random variables is a planar Gaussian analytic function.  It is shown in [3] that the distribution of the zeros of fC(z) are  invariant under translations in the plane, so it is natural to compare the distribution of zeros to a Poisson point process with the same intensity (see above).  The function

where an are again independent standard complex Gaussian random variables is a hyperbolic Gaussian analytic function.  All its zeros lie within the unit disk, and once this region is identified with the hyperbolic plane, the distribution of zeros is invariant under symmetries of the hyperbolic plane [3].  We prove in [1] that the zeros of fU form a determinantal processwith the Bergman kernel:

Moreover, the set of moduli

where an(t) are i.i.d. Ornstein-Uhlenbeck processes.  In other words,